What can we expect from renewed austerity?By Michael Burke*

The new Tory government will renew its austerity offensive shortly with the publication of an ‘emergency Budget’ on July 8. It is simple to demonstrate that the previous austerity programme caused the economy to grind to a halt (and with it the improvement in government finances).

Supporters of austerity like to claim that austerity led eventually to recovery. But this is logically impossible. A force applied from one direction, the downward pressure on the economy, cannot sequentially have the effect of lifting the economy. Most children learn these cause and effect relationships through play at the ages of 2 to 4, with marbles, wheels and water.

Therefore the actual course of events of the last round of austerity will prove instructive as to what can be expected in the next 5 years. This has important political as well as economic implications.

Anyone tempted to throw in their lot with Tory economic policy, for example among the Labour leadership contenders, will be obliged to defend the impact of Tory austerity. As there is no solid basis for the current ‘recovery’ which is supported by increasing household debt and borrowing from overseas, the inevitable bust will occur. The ‘Barber boom’, the ‘Lawson boom’ both ended with a slump, and the feeble Osborne recovery reproduces them in a worse environment.

According to the IFS the Tory Government plans imply £45bn of ‘fiscal tightening’ in this parliament equivalent to 4.1% of GDP, although we have yet to see the actual plans of the emergency Budget in June. This is approximately equivalent to the fiscal tightening of the last parliament although it is suggested that all of it will be achieved with cuts to public spending rather than in combination with tax increases as previously. The axe will fall heavier this time. 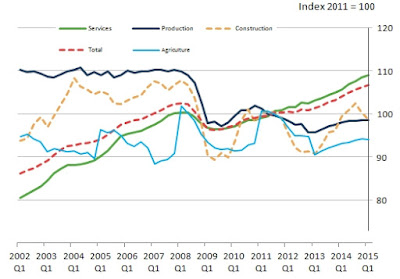 In real terms there was no growth in Government consumption spending in both 2010 and 2011. This turned a modest recovery back close towards recession, only saved by the growth of the service sector in 2012 plus the Olympics effect.

We have already seen how austerity caused a sharp renewed slowdown in the economy as a whole. There is no logic to claim that austerity also led to eventual recovery. Instead, as Tory poll ratings plunged after the ‘omnishambles Budget’ and the economy risked falling back into outright recession, Government policy was changed. There were no new Government spending cuts from 2012 onwards. Government consumption was allowed to grow and the austerity offensive was put hold (Fig.2). 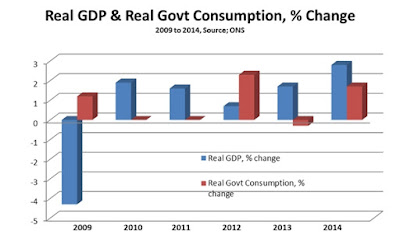 The result of increased Government consumption was a modest expansion. Real GDP grew by 2.8% in the pre-election year of 2014. But this was little more than the 2.1% growth achieved in the year prior to the imposition of austerity. Over the 5-year period 2010 to 2014 real GDP growth has averaged just 0.75%. This is exceptionally weak by historical standards and is striking after a sharp recession, when the usual pattern is for a more rapid recovery. GDP growth has only matched the growth of the population so that per capita GDP has stagnated. Under these circumstances living standards cannot rise.

Without production, the expansion of which relies on investment, consumption can only be increased by further borrowing.

Cutting public investment has been a central part of austerity and a key way that government spending has fallen overall. The deficit has fallen by damaging future growth.

This has been the effect of the previous round of austerity. The entire crisis was caused by the slump in business investment, which caused unemployment to rise and Government tax revenues to fall (hence the rise in the deficit). The weakness of business investment can be seen as early as 2006 (Fig.3) and in the sharp decline again in 2008. 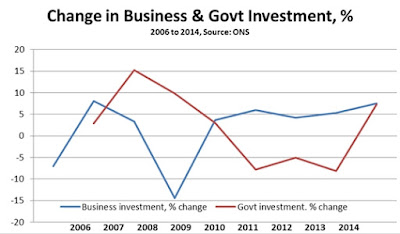 Under the Labour Government investment was increased in 2008 and 2009 to offset a crisis caused by this private sector weakness (Building Schools for the Future, bringing forward planned capital infrastructure projects, etc.).

If the Tory government attempts to close the deficit by cutting its own investment, or acts on the belief that the private sector will deliver better and more investment in public services, then the effect will be the same once more. Business investment will be cut again. There is no ‘productivity puzzle’. Without investment productivity cannot grow and living standards cannot rise.

The Tory Government has also announced plans for further cuts in social security. 64% of all households are in receipt of one type of social security benefit or another, over 20 million households. They, we are the majority.

The previous Coalition Government managed to remove somewhere between 1 million and 2 million households from entitlements that were in receipt of small sums. Most of those of working age in receipt of benefits are actually working. Either their pay and/or their hours are too little to subsist on wages alone. A large proportion of these are single parents.

The Tory party and a supportive media have waged a relentless campaign against ‘welfare scroungers’ in ‘benefits Britain’. The reality is that this is the majority, whose general welfare and wellbeing benefits us all. Not only do cuts in entitlement cause enormous hardship to millions, it actually hits everyone economically. ‘Presenteeism’, being at work but not engaged with it through insecurity or concern for childcare of healthcare responsibilities is widespread and on one estimate is said to depress the economy by £15 billion.

Entitlement to benefits is a function of low pay, disability, old age, poverty and excessive rents. Britain has one of the lowest levels of social security protection among richer industrialised economies. Britain spends 0.4% of GDP on unemployment benefits compared to 1% for the OECD average. In contrast, Britain spends 1.5% of GDP on housing benefits where the benefit goes to landlords while the OECD average is just 0.4%.

Table 2. Social Protection Expenditures As A Proportion of GDP %

A recent report by Shelter shows that the annual subsidy to private landlords amounts to £14bn, which is greater than the planned welfare cuts. The cuts to welfare will cause enormous human misery. Cutting the handout to landlords would remove incentives for buy-to-let and so act as a brake on the upward spiral in rent and property prices.

In the wider picture, the deficit will soon fall to around £85bn annually and below. Handouts to the corporate sector (tax breaks and incentives) amount to £85bn annually. The entire deficit could be removed by ending this corporate welfare without any of the damaging cuts planned. This alone would address the question of the deficit. But for sustainable growth, public sector-led investment is required.